← more from
Ropeadope
Get fresh music recommendations delivered to your inbox every Friday.
We've updated our Terms of Use. You can review the changes here.

Been Down This Road Before 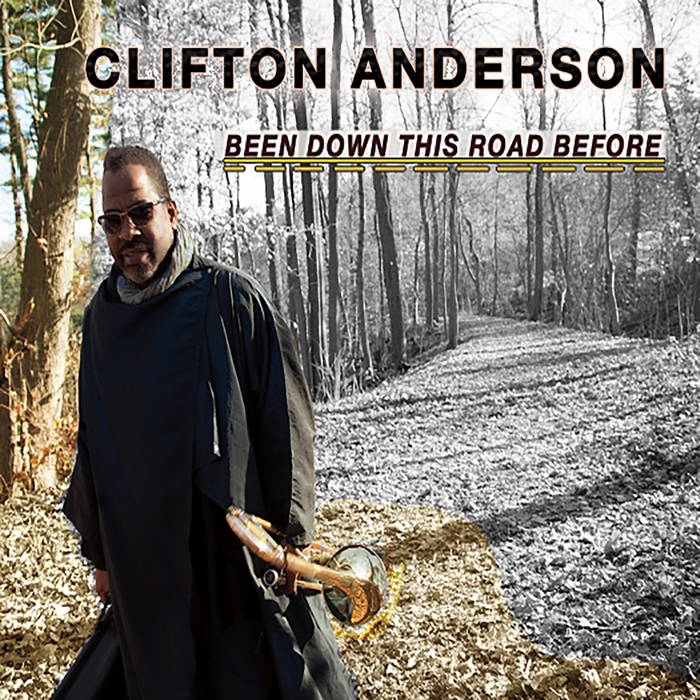 Paul Goode Accomplished musicians performing expertly conceived compositions. What more could I ask for? This is a “discovery” album in that it inspires me to explore the rest of Clifton’s catalogue.

Clifton Anderson is considered one of the leading trombonists and composers performing in Jazz today. His performances embody the rich and varied history of musical experiences he's enjoyed while working alongside a who's who of musical giants from Sonny Rollins, McCoy Tyner, Dizzy Gillespie, Slide Hampton, Lester Bowie, Frank Foster, Charlie Haden, and Dee Dee Bridgewater to Stevie Wonder, Keith Richards, Paul Simon, The Mighty Sparrow, and Merv Griffin among others. He is noted for his rich personal sound on the horn and his abilities as a composer and musical interpreter. His identifiable sound and memorable compositions have drawn an ever-expanding audience to his recordings and performances.

Clifton was born in Harlem, New York City, into a musical family and showed an affinity for music from an early age. At seven years old, he received his first trombone from his uncle, Jazz legend Sonny Rollins. Clifton attended the prestigious Fiorello LaGuardia High School of Music and Art and is a graduate of The Manhattan School Of Music. During his college years, Clifton joined groups led by Frank Foster and Carlos Garnett and became one of the original members of Slide Hampton's "World of Trombones." He quickly became one of the young in-demand trombonists on the New York scene, and in 1983 he joined his uncle's band. Clifton's work with Rollins as a featured soloist and producer is well documented.

In addition to numerous world tours with Rollins, Clifton has appeared on ten of Sonny's recordings and produced three CDs and one DVD for Sonny's DOXY label. In 1997, Clifton recorded his first CD for Milestone records (now Concord) entitled Landmarks. In 2009, Clifton released Decade on the DOXY/UNIVERSAL label. Critical acclaim for Decade and exceptional live performance reviews led to Clifton's nomination for "Trombonist Of The Year" from The American Jazz Journalist Association. Clifton's next offering, And So We Carry On, was voted "One of the Top Jazz CD Releases Of 2012" by Jazz Inside Magazine. It reached #4 on Jazz radio, remaining in the Top 20 for several months. Clifton's live shows have followed the standard set by his recordings, and he continues to play to very enthusiastic and appreciative audiences. He has performed with his sextet at major festivals within the United States and Europe.

The new album from Clifton Anderson, Been Down This Road Before, is set for release on December 4, 2020. The title single hits the airwaves and streaming sites on October 2:

“Been Down This Road Before is a thought provoking musical message, delivered at a time when racism, greed, injustice and a deadly pandemic are jeopardizing our ability to harmoniously exist with one another and with our planet. I believe music is a powerful tool to evoke consciousness and therefore change. I approach my music with the idea that it must do that as well as uplift the listener spiritually, intellectually and soulfully. With Been Down This Road Before, it’s all in there. (Clifton Anderson)

Clifton Anderson is considered one of the leading trombonists
and composers in Jazz today. He has worked with a who’s who of musical giants; from Sonny
Rollins, McCoy Tyner, Dizzy Gillespie, Slide Hampton, Lester
Bowie, Frank Foster, Charlie Haden and Dee Dee Bridgewater to
Stevie Wonder, Keith Richards, Paul Simon, The Mighty Sparrow
and Merv Griffin, among others. ... more

Bandcamp Daily  your guide to the world of Bandcamp

Sampa The Great joins the show to discuss her release, "As Above, So Below".